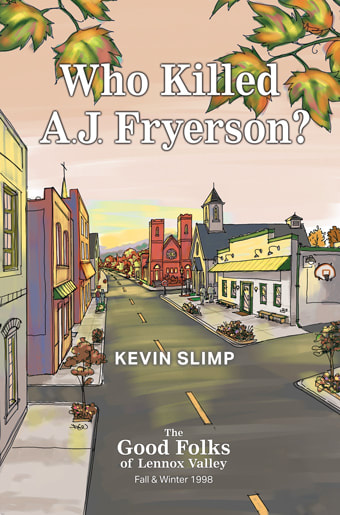 Millions of readers have followed the exploits of The Good Folks of Lennox Valley since featured in hundreds of newspapers in a weekly column from 2015-2019. The members of Lennox Valley's four churches – Methodist, Catholic, Baptist, and Lutheran – have become family members to readers of the syndicated column and book series.

If you knew A.J. Fryerson, you knew one thing above all: He complained about everything, not just a few things.

He complained because the Valley didn't have a traffic light. Then, when the town installed its first light on Bearden's Corner, he complained about that.

He complained because he couldn't get a beer at either of the town's eating establishments.

Then, when the town held a referendum and the Hoffbrau started serving beer, he complained about that.

He complained because all the "preachers in town" were "older than dirt." Then he complained when the Lutherans called Brother Jacob, and he complained even louder when he learned the young pastor preached in his bare feet.

Simply put, A.J. lived to complain, and like most folks who complain all the time, hardly anyone noticed when A.J. got hot under the collar. He was the most frequent caller on "Renderings with Raymond," and after Raymond took a break from airing his show following his mayoral defeat, A.J. complained about that.

Yes, A.J. Fryerson complained about everything. That ended, however, in late 1998, when A.J.'s complaining suddenly stopped.

With original cover art by internationally-recognized illustrator, Danny Wilson, Who Killed A.J. Fryerson is a perfect gift for friends and family of any age.